THIS CONTENT IS COPYWRITED, REDISTRIBUTION OF IT (including copy/pasting it to a message board, forum or bbs) IS PROHIBITED AND COULD RESULT IN LEGAL ACTIONS - feel free to quote up to 1 paragraph providing a source link to http://www.49ersparadise.com is included

Kyle Shanahan says Mike McGlinchey is “going to be out four to six weeks.”

This is a portion of a syndicated post. Read the original at Inside the 49ers or scroll down the Extra Point. 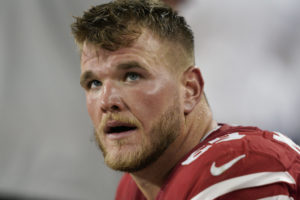 Extra Point:
Some teams find a way to beat themselves, but the 49ers seem to have found a new prep and that's get the entire team injured and see what happens...with their two starting tackles out for the number of weeks it will be a real test of the 49ers death and their ability to scheme for their deficiencies. add to that loss of the best fullback in the league.... And you have the recipe for disaster. This week the 49ers will be tensioned by their best opponent yet and it's a division game .... It's going to be a hard one

This site is in no way affiliated with 49ers.com or the San Francisco 49ers, the NFL, or any of its teams or players. I claim no responsibility to any of the logos or graphics that may be associated with either of the above organizations. The San Francisco 49ers logo is property of the NFL and I claim no legal rights to it. All graphics and content found on this site including "49ers Paradise", "49ersparadise.com", "49ersparadise.cjb.net", "A Place Any 49ers Fan Can Call Home", "Above The Fold" and "It's What's Above The Fold" are copyrighted (since Feb. 27/96-present) and can not be reproduced without expressed written consent from me unless otherwise specified. 49ers Paradise Site Map 49ers official addresses: Head Office - 4949 Centennial Blvd, Santa Clara, CA 95054 | Stadium - 490 Jamestown Ave # 400, San Francisco, CA 94124 OR 602 Jamestown Ave., San Francisco, CA 94124
[Contact Me]

Thank you for your support of 49ers Paradise. Please remember that 49ers Paradise is offered on an "as is" basis. We make no guarantee of 100% access and recognize that there may be times when the site is down, or inaccessible. We strive to keep the site running on as reliable a basis as possible but will not issue refunds or transfers of membership under any circumstances. Donations may still be required to support the site. Topics or posts may be deleted or moderated at our discretion. Accounts may be banned at our discretion, you are encouraged to read the forum rules before posting.