THIS CONTENT IS COPYWRITED, REDISTRIBUTION OF IT (including copy/pasting it to a message board, forum or bbs) IS PROHIBITED AND COULD RESULT IN LEGAL ACTIONS - feel free to quote up to 1 paragraph providing a source link to http://www.49ersparadise.com is included

Can the Return of Garoppolo Halt San Francisco Slide?


There’s little to cheer 49ers fans at the moment with the team having made a slow start to the new NFL season. Having failed to make it past the regular season in 2020/21.…

There was hope in the supporters’ ranks that things would be different this time but a 2-3 opening record suggests something different. 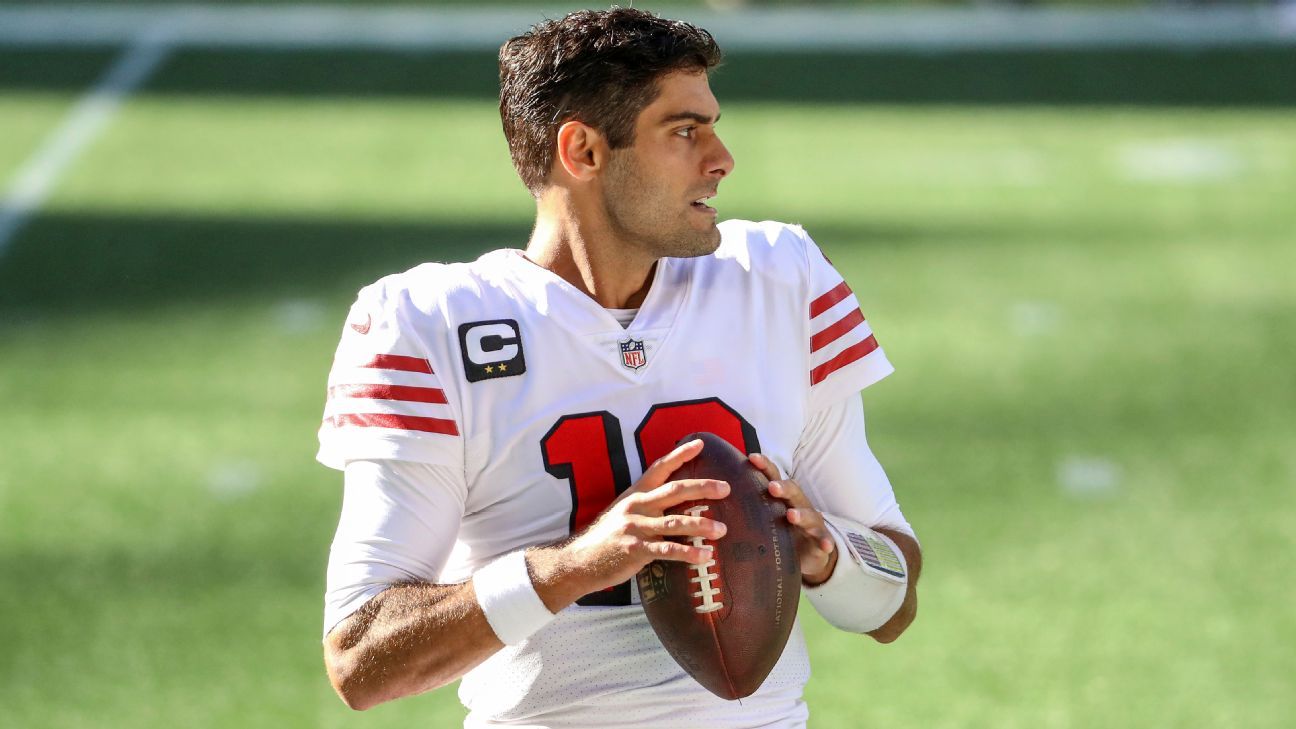 Head Coach Kyle Shanahan could conceivably point to several 49ers’ injuries as a reason why the roster is underperforming but San Francisco will need to start winning if they are to stand any chance of progressing into the postseason.

One piece of good news sees the return to training of key quarterback Jimmy Garoppolo but could his influence begin to rescue the 49ers campaign?

Having won the NFC Conference in 2019, the subsequent two seasons have been disappointing to say the least. San Francisco may have lost that Super Bowl final two years ago but few would have expected them to have missed out on a playoff place in 2020.

Perhaps that disappointment and the long wait for a sixth Vince Lombardi Trophy had an effect last season but it cannot be used as an excuse in 2021. Following that mixed start to the new campaign, Coach Shanahan’s men have it all to do if they are to get beyond the regular season.

The top NFL betting sites as shown by sbo.net have the Tampa Bay Buccaneers as favorites to win the next Super Bowl, closely followed by the Buffalo Bills and the Kansas City Chiefs. Also in contention, according to those sportsbooks, are the Los Angeles Rams, the Baltimore Ravens and the Arizona Cardinals.

Meanwhile, there is little support for the San Francisco 49ers who are a huge outside bet for Super Bowl glory at the start of 2022. There is, of course, a long way to go in the campaign and the 49ers can still address that poor opening. With scope for Jimmy Garoppolo and others to come back from the physio’s room, improvements can be made and sbo.net’s bookmakers will react with changing odds at the end of every game.

There will be betting options for each match too and visitors to this site can get involved by signing up with any sportsbook listed. All of them will accept new customers and there are many generous welcome promotions in place.

A range of funding methods and effective customer service are among the other benefits to be found. With news articles and opinions relating to the NFL, sbo.net is a useful website but are things really set to improve for the San Francisco 49ers?

Garoppolo is not the only player to have been sidelined in recent weeks but most would argue that he’s the most influential absentee. Having suffered a calf injury during week four, he’s only missed a game and a half but can it be a coincidence that San Francisco lost both of those matches?

While early reports are far from definitive, there is a strong indication that the quarterback will return for the week six clash against the Indianapolis Colts and the 49ers will certainly welcome him back.

Having a bye week could have been the best possible piece of news for Coach Kyle Shanahan as he looked to address that 2-3 opening return. The break gave Garoppolo the chance to fully recover from his calf problem and Marcus Harris, Trey Lance, K’Waun Williams, Dre Greenlaw, Jeff Wilson jr and JaMycal Hasty are all making good progress.

That’s a big injury list and one that has played some part in the 49ers’ season to date. Of those names, Wilson, Lance and Harris may be in the frame for a return in week seven while the remaining players could stay on the sidelines for at least another seven days.

Their recovery and return can’t come soon enough. While it’s natural that the focus should be on Jimmy Garoppolo, that list includes some influential players and back-up QB Trey Lance has been another big miss. It’s not been an encouraging start but, with those men set to return, the San Francisco 49ers still have time to turn things around.

This site is in no way affiliated with 49ers.com or the San Francisco 49ers, the NFL, or any of its teams or players. I claim no responsibility to any of the logos or graphics that may be associated with either of the above organizations. The San Francisco 49ers logo is property of the NFL and I claim no legal rights to it. All graphics and content found on this site including "49ers Paradise", "49ersparadise.com", "49ersparadise.cjb.net", "A Place Any 49ers Fan Can Call Home", "Above The Fold" and "It's What's Above The Fold" are copyrighted (since Feb. 27/96-present) and can not be reproduced without expressed written consent from me unless otherwise specified. 49ers Paradise Site Map 49ers official addresses: Head Office - 4949 Centennial Blvd, Santa Clara, CA 95054 | Stadium - 490 Jamestown Ave # 400, San Francisco, CA 94124 OR 602 Jamestown Ave., San Francisco, CA 94124
[Contact Me]

Thank you for your support of 49ers Paradise. Please remember that 49ers Paradise is offered on an "as is" basis. We make no guarantee of 100% access and recognize that there may be times when the site is down, or inaccessible. We strive to keep the site running on as reliable a basis as possible but will not issue refunds or transfers of membership under any circumstances. Donations may still be required to support the site. Topics or posts may be deleted or moderated at our discretion. Accounts may be banned at our discretion, you are encouraged to read the forum rules before posting.